I have been carrying around a sweater with me all summer because this country has an egregious and unhealthy obsession with air conditioning. Air conditioning doesn’t build character or make you a more interesting person. It just encourages you, an almost thirty-year-old college graduate, to stay indoors and argue with adolescents on XBox Live while intentionally trying to make them angry for your own amusement. It transforms balmy summer days into intolerable hellscapes that make us scurry our pudgy pink flesh from one climate controlled environment to another. While an article against conditioned air might appear to be one of the most trivial series of complaints in existence, consider that the average US household owes roughly twenty percent of its annual power usage to cooling. That’s a lot of money and wasted energy when you could just wear an old wrung out shirt that you dunked in the sink for free.

Twenty years ago air conditioning was nearly ubiquitous in the United States but relatively unheard of in places like China or India. Since then, the number of American homes equipped with A/C has actually doubled and it has become almost commonplace in developing countries. That’s a lot of units when you consider just how many people live in places like China and India. Experts are anticipating energy consumption to reach, if not surpass, ten trillion kilowatt-hours every year just for cooling. If that sounds like a huge number it may be because it is. And that’s sort of ludicrous for a luxury item that contributes directly toward global warming while simultaneously increasing the cost of the very energy used to run it. We are tempting fate to an alarming degree here. 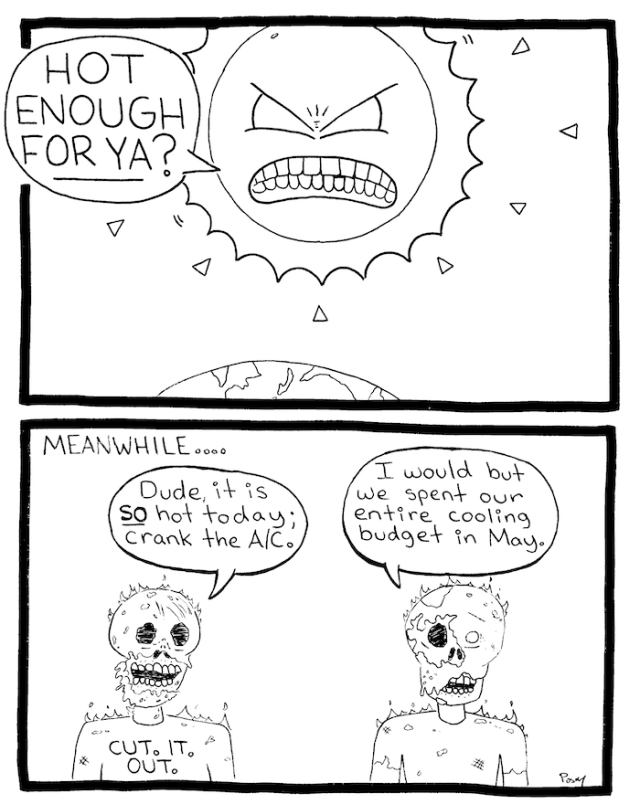 But it’s not exclusively a problem relating to the environment. It can also be a quality of life issue for individuals. Like many people, I used to work in an office building . I primarily commuted by motorcycle during the summer months and, after moving to New York, rotated in walking. It was nice to have the time outside but, for the first three hours of every day, I would shudder and quake as my normally easy flowing vital fluids would coagulate inside of my body as a result of refrigerated air. Some days were so cold that I couldn’t even think straight. I would forget to do all of those little things that keep a business running smoothly. Things like adding exclamation points that help to saturate an otherwise bland corporate email with false positivity and reassure coworkers that you aren’t upset with them (even though you usually are). That’s the sort of mistake that could ruin a professional relationship forever. Strong hot coffee served to thin out my blood enough to push it around my body and keep me conscious while I wasted the day fixing spreadsheets and occasionally jotting down creative ideas on company time. This was not, however, a permanent solution as I became increasingly lethargic as lunchtime neared. Meanwhile arguments would usually spring up about the thermostat depending on what people were wearing and who had most recently been outside.

Actually going outside on an oppressively hot day after having spent four full hours in an arctic cavern with florescent lighting is somewhat similar to developing a severe mental illness inside of a microwave. The heat boils your brain while your eyes fail to adjust to the natural lighting. All that cool air has done is make the normal summer climate feel like a stifling vomit-inducing furnace. The first breath of warm pollen-laden air is so incredibly unpleasant that you have to ask yourself why you bothered to come outside in the first place. It’s a miracle that people don’t just contort themselves into a screaming ball whenever they leave the building. We literally feel disoriented and sick when exiting the icy grasp of an office building or restaurant for the midday heat. It’s like the sun is exercising its own personal vengeance upon us for forsaking its cosmic glory by partaking in artificially conditioned air.

The truth is that it usually isn’t all that hot; sitting around in cold air has just fooled your body into thinking it is. Unsurprisingly, I have not noticed any of this when I work from home or at locations that just use fans. The reason for this is that our bodies have evolved to deal with this kind of thing if we give them the opportunity. Air conditioning in the home was designed to make those few uncomfortably hot hours during the worst days of summer bearable. It was not designed to act as refrigeration for fat people who never go outside. It should be used in hospital burn wards and to keep astronauts from being cooked alive by solar radiation. It should not be used to preserve your flesh and keep you indoors while you gorge yourself on snacks and watch marathons of television shows with your spouse/eating-partner. The only time I’d ever want to be subjected to non-stop conditioned and purified air is if I am living inside of an iron lung or trying to colonize the Moon. Here’s a good rule of thumb. If you are finding yourself sweating while stationary, drink more water. However, if you find that water is insufficient in cooling you down or you start to feel shaky and sick, then it might be an okay idea to turn on your A/C. But let’s not just give up the ghost once it hits two degrees above your idea of the perfect temperature. The official temperature at which a fan starts losing it’s cooling effectiveness is when it’s above 90 degrees Fahrenheit indoors (33 degrees Celsius) and even hotter outside. At this point, you might be contributing to rolling blackouts but can still switch on the A/C nearly guilt free. Below that, some shade and a fan should almost always suffice. And don’t act like they don’t do the trick. In South Korea, superstitious types believe that the power of indoor fans are enough to kill people while they sleep. It is called “fan death” and has led to all Korean fans to having timers. It is also acknowledged by the South Korean government to be a genuine health concern. Look it up before I get further sidetracked. 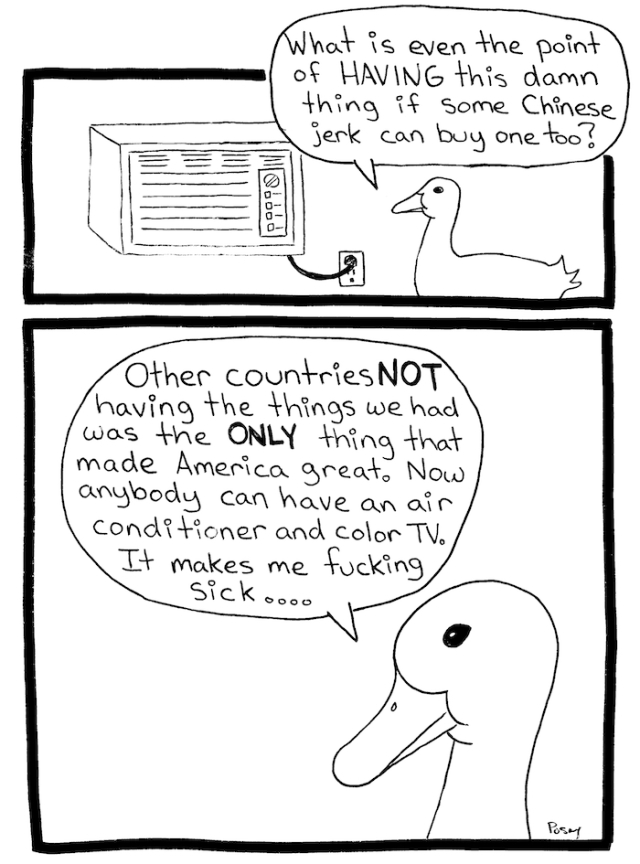 I wonder who even decided that it should be the same temperature year round and that the seasons were just a big inconvenience. Do children still chase after ice cream trucks and play in the park or are we past all of that? We should be saving air conditioning for the important stuff like biological laboratories, microchip production, industrial facilities, mining operations, and making sure server rooms don’t overheat. As for our individual comfort, I do not believe we are gaining anything by attempting to maintain an unchanging indoor climate. With the exception of those poor few living in the most sweltering places on the planet, nobody’s life is being enriched by air conditioning in the home. Sometimes I like to pretend that I’m some great twentieth century author in my muggy New York apartment with the ceiling fan whirring reassuringly overhead. But other than the occasional abuse of stimulants and alcohol, the overall lack of wealth, and the infinite hours wasted on my art, there are few similarities. The oldest thing I occasionally write on is a PC from the start of the new millennia, I’ve never once done a stint in prison or mental institution, and I know that I will eventually lug that stupid air conditioner over to the window and turn it on. But I promise not to do it until I am so immobilized by the stifling summer heat, that all sense of shame has left me. That is my pledge. I solemnly swear not to be some milquetoast wonder who contributes to the subtle downfall of society and nature (like my neighbors) by perpetually running my air conditioner because I am too timid to experience even the most subtle changes in weather.