You Monsters Are People of New York (Not Copying HONY)

Considering the nearly unfathomable popularity of things like Humans Of New York, I wanted to try my hand at capturing the essence of big city pedestrians myself (because I was inspired NOT because I was copying him or because the HONY hype finally died down a little). Getting a glimpse into one person’s soul is an incredible tool when dealing with every other wonderful person you’ll encounter later in life. It is only through understanding each other as individuals that we can grow as a species. Follow me on a multi-part photographic journey into the heart of New York City and let’s take a bite out of The Big Apple™ together!

“You know, despite how good things have gone for me, I’m incredibly cruel to most people. I’m financially stable and have a great family but I treat people like absolute garbage. Pretty much everyone compliments me on my outfits and the people at work are always really kind, a lot of them actually have done numerous favors for me. But I usually tune people out in conversation and I tend to my teeth a lot. There is also this part of me that can’t stop talking about people behind their backs and I routinely complain about having to wait in lines. Since moving to Manhattan six months ago, I have regularly been sharing online articles about what it’s like to be a real New Yorker and getting tons of likes. I had a wonderful childhood and a caring family and I would just make the other kids miserable despite how hard they tried to make me like them. You’d think that after all this good fortune that I would be a lot nicer but, nope, I’m not. My relationship with my father and my pug are the most important things in the world to me.”

“Every day we’re on the job, I think about how cool it is that we get these awesome guns to play with. I mean, you could probably kill twenty to thirty people with this gun without breaking a sweat. Totally badass. And it’s not a cheap rifle either! I think it’s like two-grand or something and then the vest and the helmet are pretty expensive. Totally fucking awesome. We’re like soldiers!”

“We actually passed my stop a few minutes ago. I just like to keep riding the subway after work because I really hate going home to my family. My wife gained a lot of weight recently and I sort of blame the birth of my son for the death of our sex life. I have also given up on my music career so I could take a good paying job which is necessary for supporting a family. So whenever I see either of them I literally cannot stop thinking about punching them both in the face. Those extra few minutes on the train prepare me for that feeling, affords me time to cry, and gives me the strength I need to suppress my anger and violent urges for another day.” 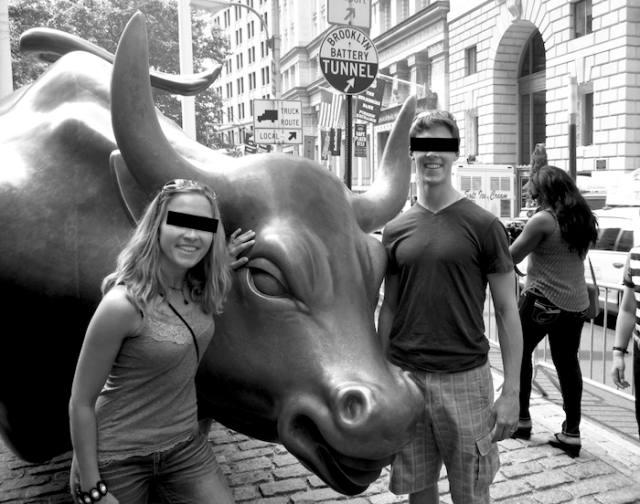 “We’re visiting from Indiana and are used to crossing the street whenever we see a black person walking toward us. But there are so many out here that it’s been really difficult so we eventually just gave up and that was cathartic for both of us as guilty white people. We are actually toying with the idea of getting a black friend when we go back home. It’s kind of funny because our friend Mike knows a guy who has one that lives near us and we were actually just texting him about it!”

Wisdom, wonderment and weird for everyone.
View all posts by You Monsters Are People →
This entry was posted in america, Dark Humor, humor, Internet Culture, parody, satire, society and tagged hony, i did not take any of these photos, I never spoke to any of these people, inner thoughts, manhattan is disney world for rich people, new york, people of new york, the big apple, this is a parody, this is all made up, you should riot. Bookmark the permalink.