In prehistoric times the thing that made a woman the most desirable to the rest of her pack was having both arms. Things like sharp teeth and having no diseases were just perks back then. If you were some archaic human female spending her days trying to pull all the skin off a mammoth carcass, had most of your teeth, functional reproductive organs, and could start a fire without help, then you were probably the sexiest woman on the planet. Every man in your tribe would show up in front of your cave with a cup of dinosaur milk and a sharpened rock in the hopes that it might be enough to gain your favor.

Fast forward into modernity and the dinosaur milk has dried up. Everyone is arguing about body shape and what not to wear. There are campaigns endorsing fatness and abhorring skinniness where people make outrageous claims like “Real Women Have Curves.” I’m going to let you and the rest of society in on a secret, real women have vaginas. In fact, that is the number one prerequisite in being considered a person of the female persuasion. It’s not the shape of your hips or the size of your rump, it’s the fact that I can’t find a penis anywhere on your body.

If you’d like to have the discussion on what’s attractive, however, that can be arranged. I’m not an expert on women’s fashion or style but I am a man that has scowled at a lot of magazine articles and television shows on those topics. I am also a person that has been sexually attracted to women for a while and have come to a few conclusions. All of this time spent teeth whitening, eyelash extending, hair relaxing, ass bleaching, and skin softening doesn’t need the additional pressure of thin and fat people arguing about who is “truly beautiful.” Chances are that everyone probably already feels uglier than they want to be while most other people feel they look absolutely fine.

When I’m walking down the street, I don’t take my time to analyze how each individual person could look better. That would would be the saddest and craziest way an individual could spend their time, so I will leave it to all of the people working in the fashion industry. For me, it takes a verbal interaction or a minimum of thirty-seconds of similarly occupied space before I bother to analyze someone’s appearance. When I first look at a woman my only goal is to assess the initial feeling I get from them. Do they seem healthy? Does their unique style appeal to me? Are they making vaguely human faces in response to things said? What’s their voice like? Truth be told, I actually do this with both genders despite my sexual orientation. Basically, I am taking a mental snapshot to file away for later use. As long as I didn’t file them under “impossible to look at without laughing or cringing” I’ll probably be willing to interact with them again.

Honestly, taking the time to judge someone’s physical appearance is sort of pointless anyway. Almost any dog of a woman can look good if makeup is applied correctly. After dating beauty-conscious women for a while you start to realize that “putting on their face” is not a misnomer. Some women don’t even look like the same person without makeup. While I love red lips and 80s blush, I am aware that real people don’t look like that naturally. Frankly, I’m much more interested in a woman’s scent and chemical makeup than I am in her looks. If she is funny, interesting, intelligent, and a little weird, that smell is going to seal the deal.

As for body shape, everyone has a preference and nobody’s preference is the same. Whatever body type you currently are, just be a healthier version. Other than that, you can ignore whatever social and media pressures are out there. Imagine, for a moment, any celebrity (male or female) and how the media would react if they gained weight, lost weight, appeared in public without makeup, or acted human at all. You probably don’t have to because you already have dozens of cruel examples queued up in your head. You know that you’re damned either way. Thin women don’t need to “eat something, girl” unless they are suffering from anorexia. Likewise, someone who is a few pounds overweight already probably knows it and isn’t in any extreme danger.

While we are on the topic of women’s bodies, I would also like to see a lot less confusing anger coming from people who are getting compliments. The she-was-asking-for-it argument should never ever work in cases of truly disrespectful behavior. However, when a person compliments you on an outfit custom-picked to get a response, you forfeit the justification to berate them publicly. There is a big difference between wearing a nice dress and having ten construction workers tell you they want to suck your fingers and wearing a provocative outfit and having one co-worker tell you that you looked nice today. One of those events deserves some serious online venting, while the other does not.

Possibly the strangest example I’ve seen lately was an article documenting “the creepiest things” said to women while cosplaying. While many of the examples were extremely forward and utterly tasteless, many were pretty tame and kind of sad:

“Can I take my shirt off in the picture with you?”

Keep in mind that the majority of these women are dressed in outfits identical to the costumes worn by characters that have served as a sexual fantasy for millions of socially awkward males for decades. While that doesn’t forgive creepy behavior, it might help explain it. Imagine being sexually attracted to Batgirl for the last twenty years. Now imagine that every girl you’ve ever liked has snubbed you and you suddenly arrive at a place where Batgirl is everywhere you look and letting other gentlemen take photos with her. You had better believe that in your lifetime of being inept at talking to women, things aren’t about to change now. In fact, the added pressure of a particular Batgirl showing bare legs and midriff (despite that never happening in the comics), you might even say what you are thinking. And that thing might be “I can’t believe I’m meeting you” or it might be “I want to keep you tied up in my basement.” The point is, someone is going to complain about it either way. 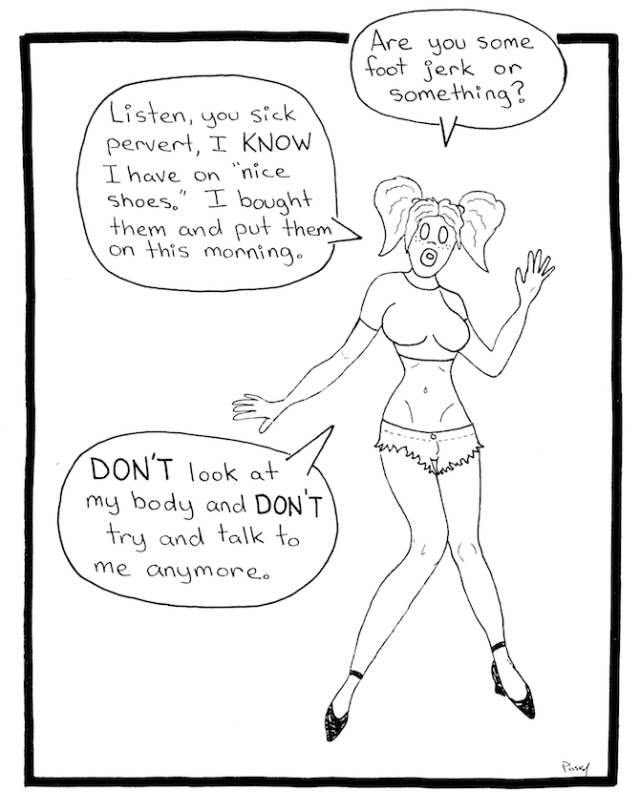 There is a weird double standard in society that needs women to look sexy and to ensure that nobody ever addresses it. It expects them to be perpetually young and tells them that they need to be curvaceous if they are thin, slim if they are voluptuous, white if they are black, tan if they are pale, sultry if they are reserved, prudish if they are alluring, and a million of other ridiculous contradictions. While this probably helps sell a lot of beauty products, it might not be particularly helpful for anyone’s mental health. Two-hundred pound skinny black girls with porcelain skin that dress like librarian hookers can’t possibly exist. Most men don’t want women to be subjected to this and all they are really looking for is a healthy looking best friend that is willing to sleep with them.

It’s honestly sort of strange how much time we spend talking about women’s bodies. We know they have infinitely more to offer and we’re well beyond the point in society where it makes sense to objectify anyone. In the United States, young women are on the verge of setting themselves up as the dominant gender of tomorrow. Single ladies under thirty are, on average, better educated and getting higher paying jobs than their male counterparts. So why do we waste time on obsessing over weight and making stupid assumptions about which age is the most desirable? Why do we attempt to draw extra attention to our bodies and then complain when we finally get it? Why do we waste a bunch of money on clothes that we’ll wear once or twice and makeup that hides our real faces? What a bunch of petty and boring creatures we must be.

Wisdom, wonderment and weird for everyone.
View all posts by You Monsters Are People →
This entry was posted in Dark Humor, history, Life, musings, society and tagged anorexia, body image, I'm just some guy, obesity, the best you are is good enough, too fat, too thin, we need to treat ourselves and each other better, women, women's issues. Bookmark the permalink.