A popular internet content aggregator asked some of the “best cosplayers of New York Comic Con” to reveal what they did with their days and none of them confessed to jerking off to anime and steampunk all day or spending endless hours arguing online with strangers while updating their Facebook statuses relentlessly. Despite the original article’s authors reassuring me that the results might just blow my mind, these people (who spent an entire non-Halloween day dressed like things they like) all have really boring sounding jobs. Some people might say that this is one of the laziest and pathetic concepts for an article imaginable but experts know that it has received half a million views on its very first day and that its co-authors have already written nearly one-thousand published articles each. Take that, haters.

I looked up what this was and this woman is either a high ranking UN official in a foreign country or is in charge of college students moving into dorms. Either way it’s outrageous that she’s dressed up as Ms. Marvel!

This one was so intensely unbelievable that the photographer actually left it slightly out of focus. But this woman is actually a student when she’s not spending part of her day dressed like a character from, I’m guessing, Game of Thrones or some stupid vampire-themed anime. 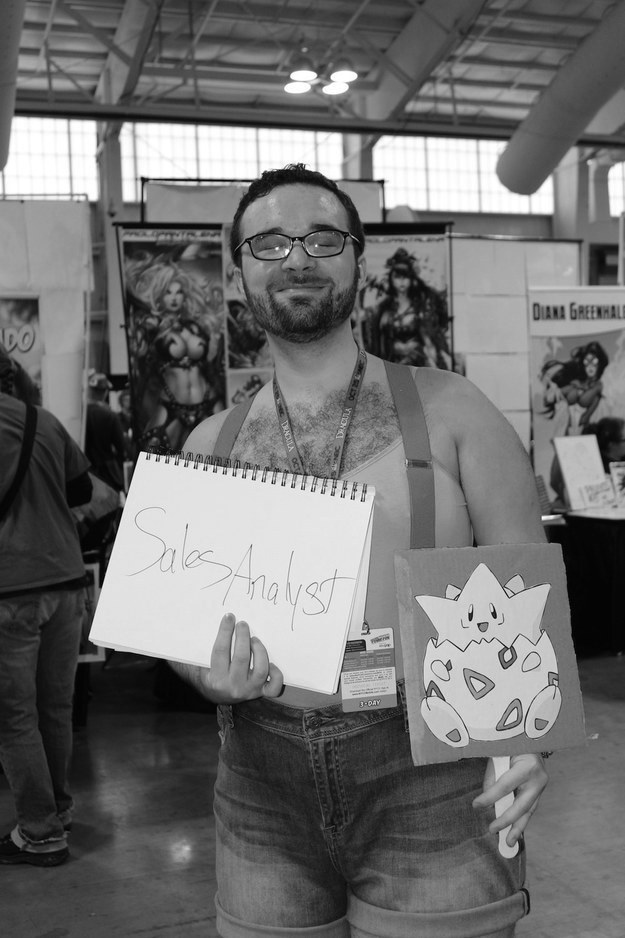 I’m only blown away that this guy’s sign reads anything other than “pedophile” but there you go. He’s the girl from Pokemon who is also a sales analyst. Is your mind totally destroyed yet?

This guy went as someone who is really into the number three but he is actually a stay at home dad who is just ashamed of that enough to need to include that he is also an author.

This spot on cosplay of Jessica Rabbit is actually Joe Biden. 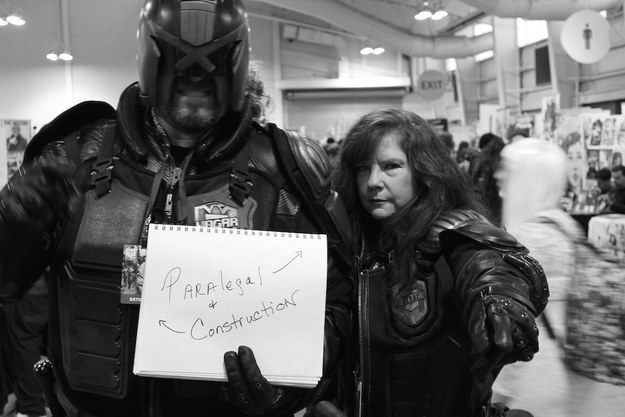 This one is a little out of focus too but it’s difficult work to take photos using a phone when you’re so geeked at how much these two look like Judge Dredd and his mom! 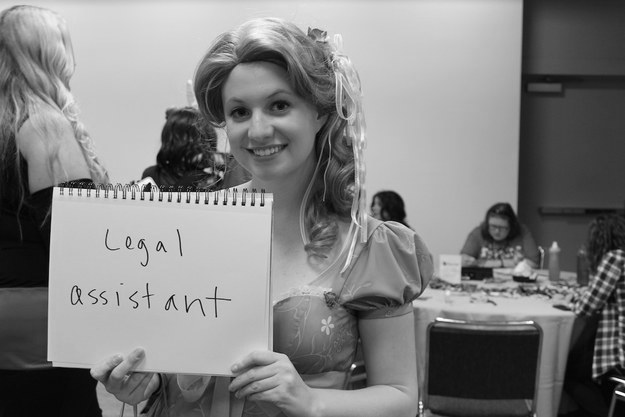 I almost refused to believe that someone dressed so extravagantly could possibly be a legal assistant but then I had to because she was holding a sign that indicated as much. This photo taught me that you can’t always judge a book by its cover and that the photographer didn’t cover a lot of ground or do more than five minutes of work because I can clearly see Ms. Marvel from the first picture in the background. 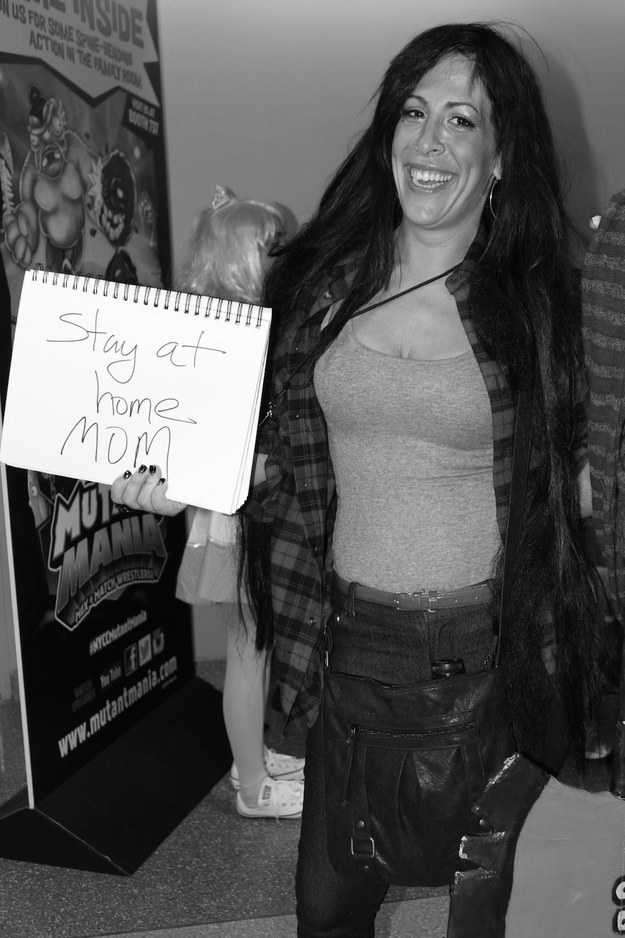 Does anybody know which longhaired character wears hoop-earrings and dresses in an open plaid shirt with their large purse laid carefully in front of them? This woman is probably doing the best cosplay in the world of whoever that is.

Since we had one already, you might be a little surprised to see another person that is a student. Well you had better believe that this female Thor is 100% committed to scholarly pursuits when she isn’t fighting Loki and eating thunder or whatever.

More students?! Outrageous. Who could have ever imagined that there would be so many? Not BuzzFeed, that’s for sure. These three are dressed up as an incomplete American flag or maybe the Andrews Sisters if one of them didn’t realize they were supposed to work a USO tour that day. 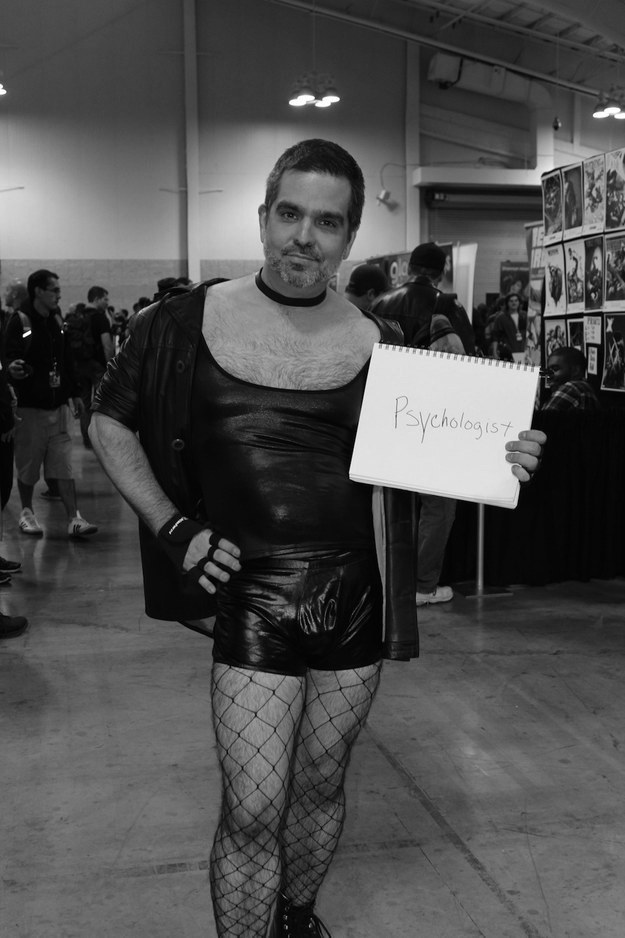 I thought that cosplaying meant you had to get all costumed up as a character. This guy is basically dolled up as himself in stockings and hot pants. Since “the man that rapes me in my nightmares” isn’t technically a profession, he had to write that he was a psychologist because he loves getting into people’s heads.

Samurai V (for Vendetta) lives with his parents.

And we’re back to student. The only difference is that this person also came to NYCC dressed as their day job. BuzzFeed really screwed the pooch on this one.

This person is an actor… yayyy. I bet they are really fun to talk to for long periods of time when you’re in a confined space. 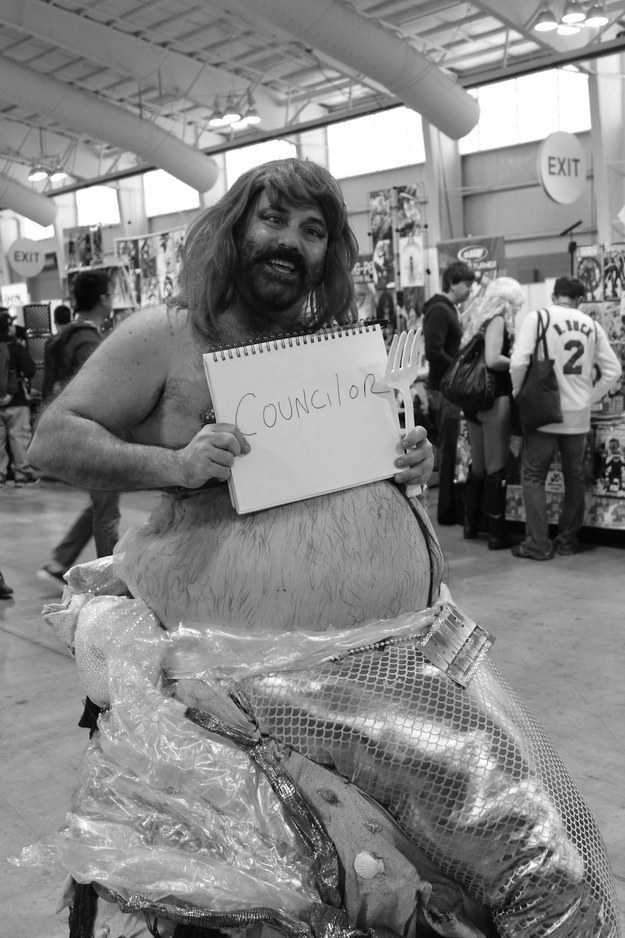 This man came as the big version of the Little Mermaid and didn’t write “future sex partner to the luckiest man or woman on earth” because he’s a class act. Whatever council he’s on is very lucky to have him.

All photos of “New York’s best cosplayers” are courtesy of BuzzFeed’s Ryan Broderick and more can be found at his awful BuzzFeed article that contains 621 fewer words in it than mine does.

Wisdom, wonderment and weird for everyone.
View all posts by You Monsters Are People →
This entry was posted in america, art, comics, Current Events, Dark Humor, humor, Internet Culture, society, style and tagged buzzfeed is garbage, comic con makes me sad, cosplay, I would kill every single buzzfeed journalist if I could get away with it, i'm a negative person, normal people doing fairly normal things with normal sounding jobs, Ryan Broderick is a terrible photographer, Ryan Broderick is the laziest author of all time. Bookmark the permalink.