Human Cheese: Not for the Common Man

After a brief surge in popularity a few years ago, cheese made from human milk sort of vanished from existence. While marginally curious, I assumed that I would never encounter it in my lifetime. I must have read a dozen articles on it being served in a few higher profile restaurants before the Health Department banned it. This was followed by Miriam Simun’s Lady Cheese Shop project. In essence, it was a week long gallery event where people could come in and taste cheeses made from the milk of New York’s finest (and perhaps most unoccupied) socialites. I believe the intent was to encourage people to think about how we obtain food and where it comes from while also offering an unparalleled dining experience for rich weirdos. The cheeses were served up with an assortment of garnishes and sometimes served on artisan breads or beside chocolate. Each offering came with chef’s notes, a completed dietary questionnaire from the milk’s producer, and even lab results on that person’s blood work. It was a high profile, creative, controversial, and culinary hit. But I had not heard much on the subject since, probably because the novelty had worn off. 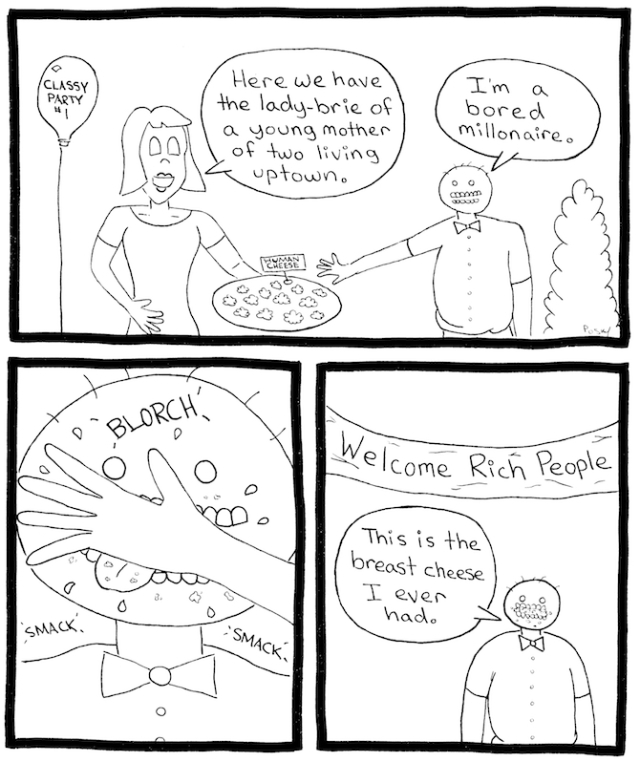 Fast forward roughly eighteen months and I finally found myself standing before of a tray of some poor woman’s warm ricotta. I had been invited out to a gallery opening celebrating the cycle of life and had been promised that there would be free drinks. The event was held in Brooklyn at a four story walk-up belonging to three young men with beards and potentially rich parents. They converted the space into a venue for artists and musicians semi-regularly and tonight the walls were adorned with photographs of afterbirth, stillborn infants, sexual intercourse, and paintings of the female form. I saw a few fertility sculptures and one terrarium that I thought might have been a display but I couldn’t be sure. I decided that, if it were my piece, I’d have filled it with tadpoles and hardboiled eggs. But not everyone possesses the same creative intuitions that I have been blessed with.

I wandered around for a while and had some wine before being confronted by a woman holding a platter. She smiled and said, “Breast milk cheese?”

There was none of the pageantry or perceived classiness that I had expected. There was no documentation, no lab results, and not a chef’s hat in sight. But I wasn’t in some fancy Manhattan gallery specifically designed to appeal to bored millionaires either. I made direct eye contact with her and understood instantly that this wasn’t just any cheese, it was her cheese and that refusing it would be the ultimate dishonor. Glancing down, it looked like someone had tossed several lumps of sweaty white dough in the center of a tray and emptied out a sleeve of soda crackers next to it. There was also a handwritten note card indicating that this was indeed “Breast Milk Cheese.”

I was completely taken off guard so my response was a brief chuckle proceeded by, “Jesus. Yeah, I guess so.”

Reaching for it, my initial feelings were of mild terror and light queasiness. It felt illegal, like being offered tiger meat or something. I have eaten almost every bizarre and disgusting type of food available in this country without ever batting so much as an eyelash but, for some reason, this felt different. Imagine someone was offering you heroin for the first time and you thought the needle might be dirty. That’s sort of how I felt. My brain understood that you have to super-heat milk to make cheese, so any AIDS that she might have had would have been burned off in the process. However, there was still a part of me that screamed out not to put this lump of person cream into my body. It was too damn personal. She was standing right in front of me, waiting for me to wolf it down. I stalled by asking a few questions about how it was seasoned. I learned that a little vinegar and a pinch of salt were the only non-boob-centric ingredients.

Thankfully she became distracted by some newcomers and walked over to them before a weird amount of time elapsed prior to my sampling of the cheese. With the the pressure off, I waited for the fear to subside before eating it because I genuinely wanted to know what it tasted like. Like most things you’ve built up in your mind, it was sort of bland, a little sweet, and smelled like your average fromage. It was basically the same as most fresh cheeses I’ve had. Throughout the course of the night I watched a young woman almost cry while another gentleman went back for seconds.

It was a very hip and predominantly younger scene. Everyone ignored the pieces or discussed them without involving politics, society, or art history. Most conversations centered around people I had never heard of or bands that I didn’t know enough about. Nobody really had anything to say. Even most of the artists appeared to have made things without any real intent or foresight. So, after a single pass, I wrangled a cat to pet and followed the cheese tray with my eyes. Three drinks and two hours later, I found myself back at home looking inside of the refrigerator for a late night snack. All I had were a couple of apples and enough shredded gouda to make a quesadilla.

I had the apple.

22 Responses to Human Cheese: Not for the Common Man