Lame New World: A Preface For Our Awful Future

Posted on February 2, 2015 by You Monsters Are People

Not long ago I was filling out a number of worksheets intended for small children, as I have a propensity to do during an evening of moderate drinking, and they pressed me into wondering about the future of politics and society at large. Based on some extrapolation of current trends, I’ve come to what I can assume to be a series of fairly reliable assumptions.

In the world of tomorrow, people will be paying hundreds of dollars every month for clean water and will no longer be able to say anything offensive without being placed into for-profit jails. Artists, unable to make even a modest living online, will have turned into flamboyant criminals straight out of the worst comic author’s most intense fever dream. Robberies will be committed by colorful characters in themed costumes and fancy sparkling hats, spouting poetry and prose as common criminals are left only with crimes of passion. As a result, creative people are cataloged by the government and any creative output needs to be approved by the newly formed Department of Arts and Ideas (The DOAI). While musicians, painters and writers oppose the new sanctions on creativity, their opposition to it fails almost immediately. The police, having practiced successful anti-protest tactics for decades, are able to quickly disband any demonstration by having snipers take out anyone holding a megaphone while riot squads saturate the rest of the crowd with a disorienting spray that is ten-thousand times more powerful than mace. It will be called Tilt™and will have helped Johnson & Johnson become the wealthiest company in the world after every police department in America orders it by the tanker full. It stains the face permanently blue and makes dissenters easy to identify for future brutality and incarceration.

Annoyed, blue faced citizens will take to the voting booth in record numbers in the hopes to oust the controlling parties and their patronage. But a series of advertisements spring up dubbing blue faces as trouble makers, suggesting that they go against the traditional values this country was founded upon. Rallied by the fears of the “indigo menace” the American people elect a senate hellbent on removing them from society and creating a political system that offers the average person more entertainment value while freeing them from routinely having to contribute to the political process. The new system takes five years to complete and is deemed a huge hit by middle America.

C-SPAN ratings skyrocket as it now only shows highlights of outspoken celebrity senators trash talking each other. People are able to SMS text in their votes for who wore which suit and tie better or provided the better insults but they’ll no longer be able to influence policy in a meaningful way or communicate any ideas directly to their representatives. In fact, long-form writing will no longer exist. Everything will be communicated through video or audio snippets of under three minutes or text messages below forty characters. Phones will still allow you to send these messages and leave voicemails but traditional calls will no longer be an available feature. Facebook will have merged with BuzzFeed to form the new social media platform, FaceFeed. Available only through a small chip attached to the frontal lobe, it provides you with the most up to date clips of everyday people reacting to things from the time when artists will still allowed to produce content. There is a particularly popular series of two minute clips where a group of young imbeciles scoff at impressionist paintings for being “too low-resolution and not interactive in any way.” The one where FaceFeed staffer, Ryan Garrett Lopez, tells Van Gogh to “Gogh on home and keep practicing” while devouring a handful of Lay’s brand chips becomes the very first sponsored viral video to break a trillion views. He later turns into the Snacking Party’s pick for a presidential candidate. While he does well in the singing competition, he ultimately loses to Standard Oil’s Kimberly Arugula Yang and her Yorkshire Terrier named Mitchell.

As the country’s first dog Vice-President Mitchell’s entire influence has to be interpreted by, celebrity animal psychic, Carla Gold. She informs America that Mitchell’s intense disgust for the anyone who doesn’t give themselves over to a higher power has compelled him to introduce new legislation banning atheism from schools and non-believers from any profession that might influence the general public. It is signed into law during the first year of Yang’s second term. Atheists are rounded up and placed into tent villages outside of of the city limits with the now elderly blue-faced masses. Government employed dentists arrive to begin the hard work of pulling out every inhabitant’s teeth so they will not later be used as a means of self-defense. Now toothless and despondent, the godless masses weep as they are gradually wiped out by hunger and disease as the rest of the country watches 3D re-masterings of hit sitcoms from the 1990s (but not Seinfeld). When Mitchell passes away at the age of 13, President Yang gives him a viking burial at a monster truck rally and files a request with the Department of Arts and Ideas to build the world’s largest monument in his honor. The paperwork takes sixteen years to go through and the monument takes another twenty to complete. When it’s finally finished it is not only the largest sculpture of a dog ever to be built but also the world’s tallest free standing structure of all time. Reaching out beyond the mesosphere, the statue’s god-like snout sniffs the heavens and forever immortalizes one of history’s greatest incidental monsters.

Face tattoos of Mitchell’s name accompanied by the Pizza Hut logo (his favorite chain restaurant) become the seminal visual accessory for most young Americans until “The Rachel” hairstyle regains popularity among single men longing to feel more connected to a woman’s plight. Alternatively, Ross’ haircut is banned when societal behavior experts deem him a level G psychological rapist after the 3D version of the episode of Friends airs where he cheats on Rachel while they were “on a break.” The grave site of David Schwimmer, who played Ross on the show, ends up repeatedly defiled and a petition forces his corpse to be moved to the second mass grave for people who are retroactively punished for the deeds of the fictional characters they portrayed on television, as the first had been filled to capacity several years earlier. Schwimmer’s ancestors hold a press conference apologizing profusely while insisting that the two characters were, in fact, “on a break” and are subsequently placed into prison for endorsing a crime against women.

Now making ninety-two cents for every dollar that a man makes, women hold the majority of the jobs available in America. Men manage to keep a controlling share of the government and the slight income gap out of spite but suffer from a thirty-eight percent unemployment rate overall. Black men especially have trouble finding work, despite George Bush IV declaring racism officially over and thanking white people for all their “hard work on this matter” during his inaugural speech. The NAACP responds to the speech by posting a five minute video on the internet of three black kittens being swatted by an full-grown white cat. Later that week it is found guilty of promoting negativity online and declared a terrorist organization by Washington. Its leaders, now in jail, LiveStream one last prayer for equality. The event and prayer are both sponsored by CocaCola. 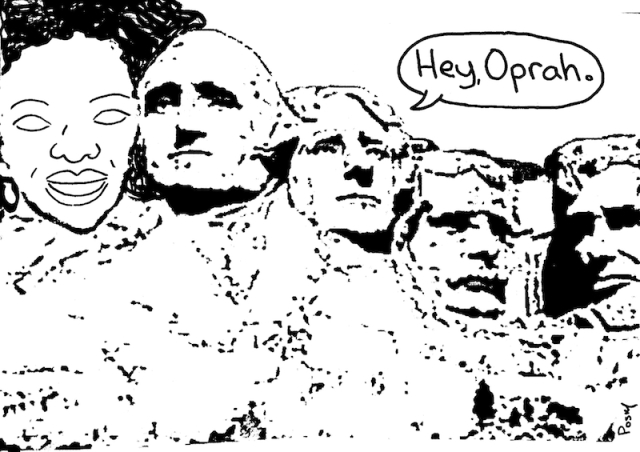 16 Responses to Lame New World: A Preface For Our Awful Future