Posted on April 2, 2014 by You Monsters Are People

A few years after the twentieth century ended the world became terrible. The economy shit the bed, everyone lost their jobs, the government started to become evil, and all educational programing was systematically replaced by “reality” television. It was as if Orwell made a half-assed attempt to write a comedy but it ended up being our actual lives instead of a single work that permanently defamed him. This new world worked out great if you wanted to live in perpetual poverty watching idiots argue wide-eyed about nothing in particular over a staccato soundtrack between fifteen minutes of advertising. But, if you were interested in being more than a culture zombie, things were going to get rough the second you left college and entered the intellectual desert of everyday life.

The internet had become our last bastion of cultural hope but that too had begun the slow decent into repugnancy. Advertising started appearing on YouTube right around the same time Justin Bieber did. Video hosting websites just started sneaking them in over the course of a few years. Now if you want to watch an instructional video on replacing your old car’s exhaust manifold, you have to watch a commercial about why you need to change insurance companies immediately. But it’s not just the advertisements that have become a problem, it’s the repetitive meaningless quizzes, the “feeling blessed” status updates, and the incessant regurgitation of popular culture.

It’s almost as if this is the new faith– a distraction from reality that makes us feel safe and comfortable and keeps us from the big questions. God’s will used to stop us from obsessing over how the universe works or questioning our places in society. Now we have BuzzFeed and fake unscripted television for that. All of this garbage keeps you willfully ignorant of what is actually going on.

And the problem isn’t so much that the trash is out there, it’s that it is as pervasive as head lice in the second grade. In a single weekend I have involuntarily been witness to online articles of Disney Princesses as zombies, as steam-punk characters, as hipsters, as sexy nerd girl cosplay, as traditional cosplay, as plus sized cosplay, as cross-dressing cosplay, as tattoos, as fake Twitter accounts, and as a seemingly infinite mass ejection of throwaway memes. Despite legitimate artists everywhere creating brand new characters and original content, we are praising those who are co-opting popular images and characters by sharing their work over and over again. Combining two things people already like isn’t innovative or cool. It’s just a good way to con someone into thinking you’re an actual artist while selling a few shirts. Yet people everywhere flip their lids over the same tired photos of big breasted women in Darth Vader masks and doodles of Dr. Mario taking a dump in the TARDIS without a moment’s pause. 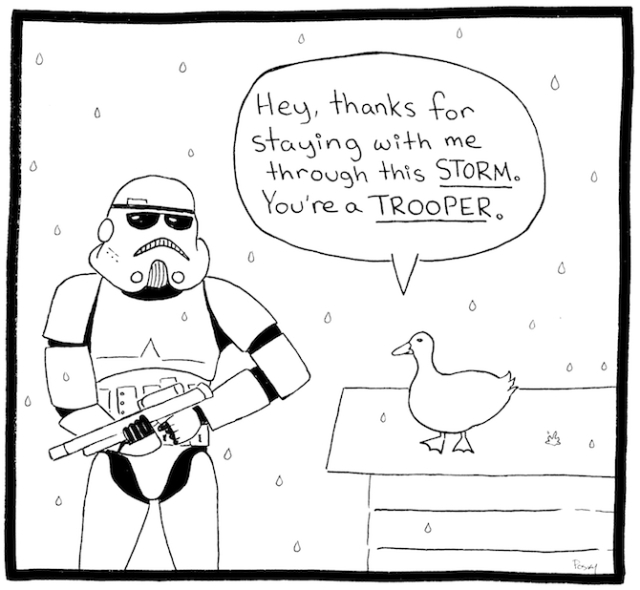 Someone creates a website where they’ve added glasses to Batman villains and then the worst kind of writer finds it and turns it into the laziest article imaginable on some popular website. Twelve hours later, they’ve got a successful post and idiots everywhere are clapping their hands, sharing it, and then to my chagrin re-sharing it until it is nearly unavoidable. It’s the mental and cultural equivalent of fast food. While familiar, prevalent, and sometimes tasty, it probably isn’t very good for you when you consume a lot of it. Think about all of the original content you are missing from artists, authors, and musicians with something completely original to say. I bet you would be getting a richer experience from their work and I bet they’d dig a share or two. That way they can get big and we can have brand new cultural icons that less creative people can copy and Hollywood can recycle into terrible films.

As a contrarian, I know I am obnoxiously and instinctively going against the grain. With that said, I am still completely aware that there are some really decent pop-culture comics and BuzzFeed articles buried among the rest. But I wouldn’t go digging through a mass grave to find the hottest corpse to have sex with, would you?

Wisdom, wonderment and weird for everyone.
View all posts by You Monsters Are People →
This entry was posted in art, comics, Current Events, Dark Humor, history, humor, Life, musings, politics, society, web comics, Webcomics and tagged advertising, being a sheep, dr. who fans, I would kill every single buzzfeed journalist if I could get away with it, internet culture, mr. bevins killed that stormtrooper's family, popular culture, social media, star wars fans. Bookmark the permalink.

43 Responses to Popular Culture As Religion: Please Kill Your God