A friend of mine called me late the other night and said the following, “It’s like we’re in hell. This is hell… but it’s still so beautiful.”

I knew exactly what he meant. A few days prior, I was wandering around in the middle of the night sulking and filled to the brim with self-pity. Filled with pressing uncertainty and unsure of where to turn, I felt the kind of bad that you know is going to be special. At times, I wasn’t even thinking, I just felt this wave of cold negativity churn in my stomach and esophagus until it settled in at the base of my spine. From there it evolved into a sharp pain as it bore itself deep into my skull. I considered jumping off a bridge or just walking until my legs couldn’t carry me further. I couldn’t rationalize anything or visualize a solution to my problems. All I could be was unhappy. But, just when I thought I was going to snap into a permanent melancholy madness, I saw the thing that saved my life.

In the middle of the sidewalk was an entire slice of pepperoni pizza and standing triumphantly on that slice was a single pigeon. Somehow he had come across it alone and could feast in relative privacy. It was an important moment for both of us and, even though he couldn’t quite express it, I knew he understood that. I watched in awe as he took bite after peck, completely uninterrupted. That slice of pizza was that bird’s moon landing, Woodstock and wedding day all rolled into one giant greasy triangle. All of my sadness left me. I couldn’t even keep myself from laughing and, when I imagined someone watching me from their apartment window, I laughed even harder. Not wanting to disturb its meal, I crossed to the other side of the street. People don’t tend to give the pigeon a lot of credit but it’s one of the smartest birds on the planet. They are also the only non-mammals that we know can identify itself in a mirror. With that in mind, I trusted that it could sense my reverence for it and the moment we were sharing. 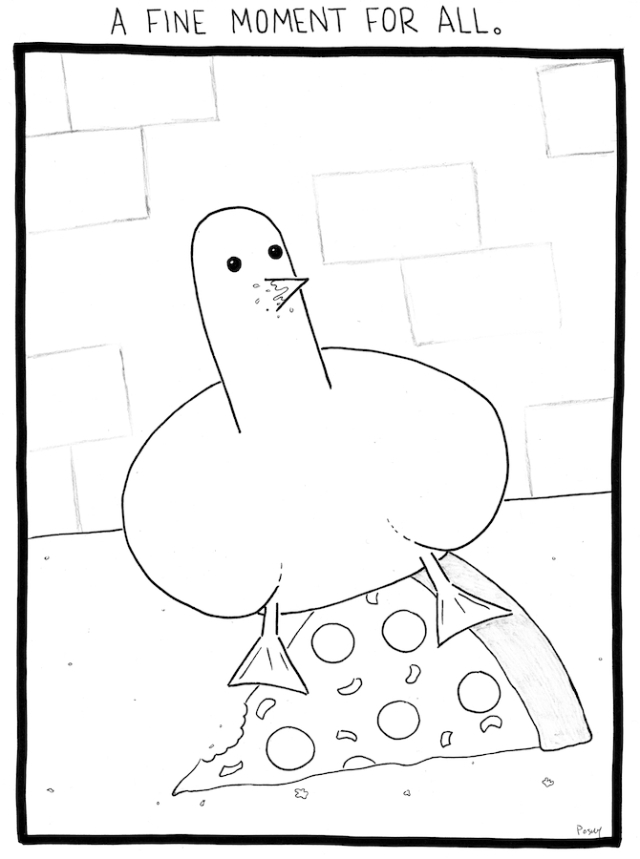 It took me a long time to settle back into being unhappy after that. Life will sometimes go that way. You’ll be in a perfect state of utter misery and then something ridiculous will come along and shake you out of it. When it finally returns, though, take that time to wonder about the big picture. It isn’t always clear but it’s worth your thoughts and energy to contemplate upon. We’re not made to be happy all of the time. Sadness has an authenticity sorely missing from a lot of other emotions. It helps focus you into realizing what really matters and what really doesn’t. It offers perspective. When was the last time you were sobbing into a pillow and stressing about not having the next consumer product du jour? Probably never, unless that was the reason you were crying in the first place. If that’s the case, you’re probably confusing sadness with some deeper seeded mental issue anyway. What I’m talking about is a real and profound sorrow that has been earned through poor choices, a great injustice, or the inevitable nature of life. It’s an imperfect world and most of us are just trying, unsuccessfully, not to be dicks to each other.

But whether or not that sadness goes away is irrelevant. Whether or not you share even a single thought about it doesn’t matter either. It’s special and for you to do whatever you want with it. For me, I compartmentalize what I can and share whatever manages to wiggle its way out of the corners of my mind. Sometimes I feel like one of those dogs that Russia shot into space– confused and scared, but part of something so much greater that they could never quite wrap their minds around. Some of those dogs were doomed from the start and maybe some us are too. But the fact remains that they had to go because they were chosen and, in a way, extraordinary.