How To Kill The President

Recently a friend of mine sent me one of those shortened website URLs that brings it down to a few characters of gibberish. The purpose being that it looks marginally better than the mile-long web address it normally takes you to. However, when I clicked this one, it took me to the FBI homepage with the search results for “How can I kill the president?” While I knew instantly that this was a hysterical prank, I was also keenly aware that the FBI is strongly against people killing presidents (with the possible exception of John F. Kennedy). I did not want my life to become a substantially less exciting version of The Bourne Identity so I immediately shared the link with as many people as humanly possible. That way the FBI would either think that it was a harmless prank or that there is a growing number of wildly unstable young men that, for some reason, all thought the FBI’s website could provide them with the information required to assassinate the commander-in-chief.

Still, with all the internet peekaboo that goes on these days, I knew that this could potentially pose some problems for me in the future. This risk is multiplied further because I have a tendency to end a lot of phone conversations with “Alright, mom. I’ll talk to you later, explosive devices, white house, terrorism, my contact in North Korea, Allah Akbar.” My parents seem particularly disappointed when I end calls with them in this manner. They know that, even if you’re joking, powerful people can be really stupid and it’s better to be careful of what you say.  If you don’t believe me ask civil rights victim Justin Carter. So it goes without saying that I need to have a public record to clear a few things up. Firstly, if I were ever to murder someone, it would only be out of revenge or strictly for a twisted form of pleasure. It would not be political. Up until this point, I had never even considered killing any presidents (let alone one I voted for). That isn’t what I want to be known for and it, frankly, seems like a lot more trouble than it’s worth. Some degree of planning must have to go into it and, if you kill a president, that’s the first thing history is going to put on your time-resume. Do you think John Wilkes Booth is getting tons of questions about his acting career in hell? I somehow doubt it. Worse yet, if you’re unsuccessful, you’ll be known as a crazy failure (which the odds dramatically favor). If you don’t believe me just ask John Hinckley, Jr. The only things I know about that man are that he couldn’t kill Ronald Regan and failed to impress Jodie Foster—repeatedly. I can’t say this for certain, but I do feel like Jodie Foster would have at least written Lee Harvey Oswald back if not had full-on intercourse with him. In my experience, women like a man that can get things done.

Even if I try to think objectively, I can’t see how killing government officials would be a logistically viable solution for change. Historically, when one president gets killed they just replace him with another one. I would imagine it’s the same case for governors, mayors, maybe even the humble comptroller. In fact it took me over twenty-two minutes of research before I figured out a way to make a political assassination work in your favor. First off, the person you have to kill must be a senator. You also have to know the governor of their state well enough to have some level of influence on their opinion. Lastly, you can’t get caught because they’ll put you in jail. That is already way too much work. If you’re trying really hard to advise your governor on who to pick as a senatorial replacement for someone who “might die pretty soon” they are going to be crazy suspicious of you from the get-go. But there isn’t going to be enough time for you to kill someone inconspicuously, cover your tracks, and have the time left over to trick the governor into appointing your friend as a temporary replacement anyway. 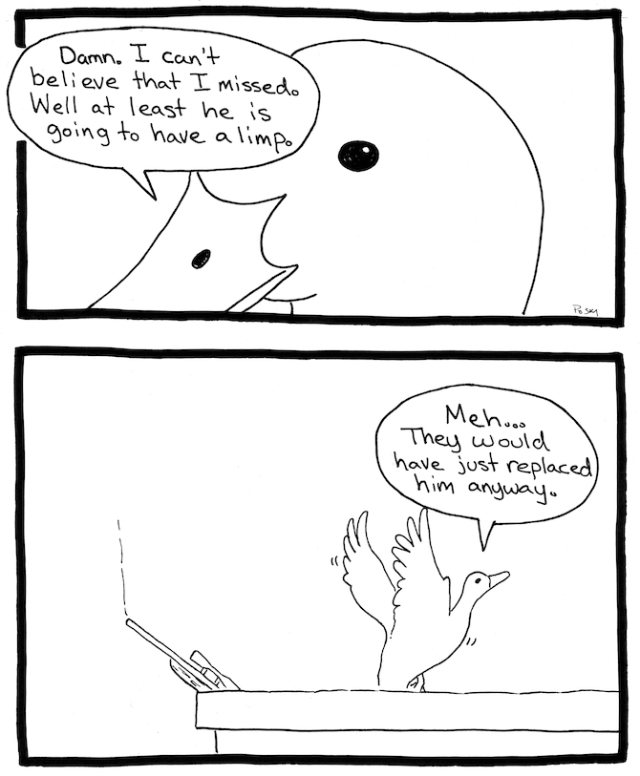 But none of this even covers the work involved in the actual assassination. As far as I can tell, the most American way to kill a political official is with a gun. Literally ever single president that has been killed in office ate lead for breakfast. So, if you’re crazy and reading this in another country, maybe poisonings and stabbings are good enough for your political killings but this is America and we demand something a little more high-tech. However, this creates a new problem: where to get a gun. Luckily for the violent and mentally unstable among us, they’re actually extremely easy to get. While gun dealers are required to issue background checks and record the sale, private sellers do not. You can go online and buy a second hand weapon in under twenty-four hours without even having to show your ID to the other person. That’s the kind of freedom we could probably use in other areas of American life.

So, now that you’ve worked up a solid level of angry madness and you’ve got your gun all that is left is to figure out how to set up the perfect opportunity to brutally murder another living person because, for some reason, you’re convinced that’s the solution to everyone’s problem. For me, it all seems entirely too complicated to even want to bother with. I’d rather write a bunch letters or organize a series of protests with clever signs (maybe with hysterical puns). Besides, why would you want to martyr someone you hated? Kennedy and Lincoln are both made extra famous because someone decided to spray their gray-matter all over their wives. Nice job, asshole, you just made them a hero to millions of people. Save the assassinations for the countries with tyrants greedily clutching onto power and stifling the civil rights of their people or wait until our country more closely resembles one of those. But remember that, if ever it does, we all should have been trying a lot harder to stop that from happening in the first place.

The more I think about it, the more it seems like even worrying about the life of a president is fairly pointless. The death of our freedoms won’t be flying from the end of a barrel. They will come as the result of years of public indifference, ignorance, and apathy.

20 Responses to How To Kill The President