Posted on September 24, 2014 by You Monsters Are People

Over the weekend nearly half of a million people peacefully marched down Sixth Avenue through Midtown Manhattan hoping to make the correct amount of noise required to convince corrupt decision-makers and science-ignorant mongoloids to stop ignoring that climate change was a genuine issue. There was an eerie moment of true silence followed by a wall of sound that came up the streets like a wave of mad energy. They hooted and tooted and blasted the vuvuzelas like insane sports fans who had replaced men kicking a ball with natural resources and breathable air.

What this march showed is that people really seem to care about this issue and are upset enough to stop complaining online and get out into the streets. This makes sense because most rational people would jump at the chance to stop a series of world destroying disasters from taking place. Unfortunately, this particular set of disasters has yet to garner the right sort of attention from the right sort of people. If there was a giant asteroid hurtling toward Earth at four-hundred times the speed of sound, we wouldn’t need a march. I know this because there is just such an asteroid and NASA is already planning to land astronauts on it when it’s in our neighborhood roughly sixty years from now. Meanwhile, climate change is this sort of vague blanket term with no single physical manifestation that exists as a byproduct of making people tons of money. We can’t fix it by shooting totally awesome space rockets at it and that’s a huge problem. 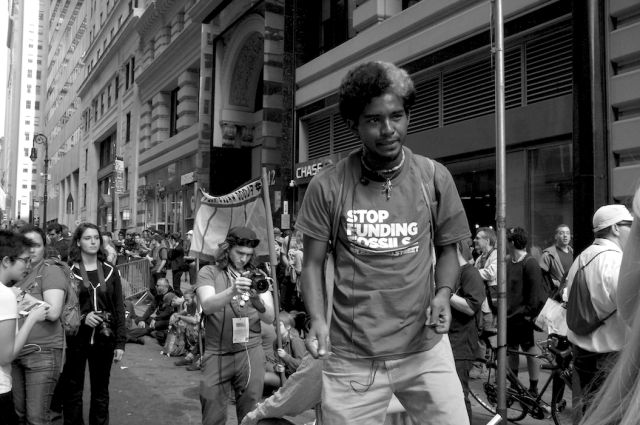 The following day several thousand other people went downtown to Flood Wall Street. Dressed mostly in dark blues and aquamarines, protesters assembled at the bottom edge of Broadway near Battery Park and moved north. I had come to gawk with a musician, a knitter, and my main creative partner of the last decade who was in from our nation’s third coast. He had brought a camera and was interested in documenting the goings on while I was content with quietly judging people with my arms folded. Just beyond midday the mood was casual and Vincent snapped the occasional photograph while we meandered through. There was a sequined woman on stilts dancing, a giant flower that hinted unsubtly back at the shooting of Mike Brown, and oodles of the nearly relevant hippie drivel scrawled upon signage that we’ve come to expect. We even saw a man happily handing out bottled water, which I thought was hysterical. The crowd itself seemed genuine in its cause, however, and continued to grow throughout the day. Officers were speckled throughout the crowd and many were smiling and chatting up the protesters. At this point, the most densely populated areas were at the base and thinned out as you went north with the press skirting around the edges. There was a large open space up the block where the NYPD had set up numerous barriers that people seemed to be avoiding. But, for the most part, everyone seemed tranquil and several groups of the crowd were doing call and respond speeches referred to as “The Human Microphone.” It was close to a perfect demonstration. Nobody seemed angry and the area didn’t smell like people had been pissing in the streets– but all of that was about to change. 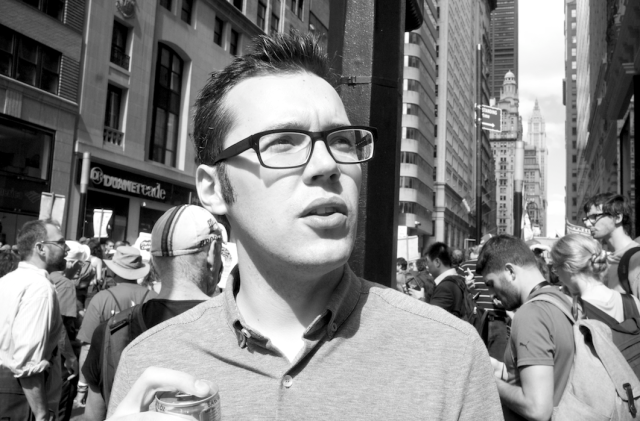 As the the sun went down and the closing bell neared, the protesters made a push north as they had not yet reached Wall Street. The police had begun bringing in additional steel barricades to keep the protesters isolated just southwest of their goal. By now the tactics honed years earlier at Occupy are common practice for most law enforcement groups when dealing with crowds. Wall Street, which will almost certainly be underwater when the sea level rises as a result of the icecaps melting, wanted nothing to do with the protesters and the police had established a line to keep them from it. Barricades already lined the sidewalk but they continued to bring more in as the crowd surged up the block. The media had predicted this move and condensed here, as did we. Vinnie, a shorter man than some, had to really press himself in and hold his camera high to get much of anything. Tensions were building and random officers trickled as more aggressive protesters attempted to move barricades and encourage others to the front line. We saw a patrolman’s hat fly over the crowd as everyone lined up to face each other. Then, with little warning, someone sprayed mace into the faces of a few protesters trying to make it past the line. This caused light panic, some yelling, and the sea of people swelled before condensing in on itself again. I could see the dancer on stilts just behind the main group holding her ground as Vinnie returned briefly to say he’d tasted the residual misting of pepper spray. There was a light scuffle before the police made clear what part of the street would be theirs. 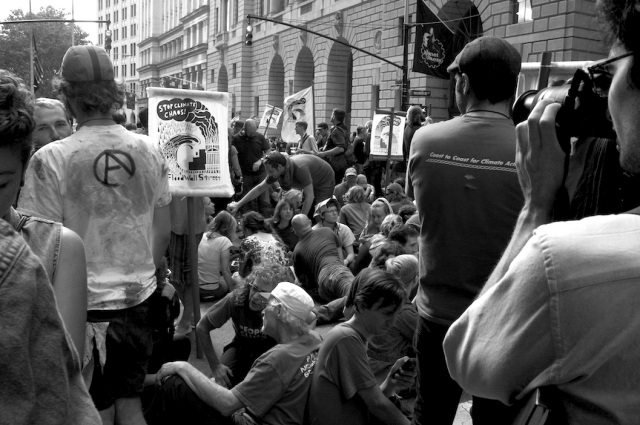 Some officers were clearly excited for any excuse to bash someone’s face in while many others genuinely seemed interested in keeping the peace. The same could be said of the protesters as I could see a frantic pocket getting worked up and mad. They would clumsily attempt to move barricades or climb onto light poles and chant angrily. Nobody, however, bothered to take note of the large number of officers assembling on scooters two blocks up. Nobody except for us anyway. Gawking with no objective allowed me to survey to area and I suggested we fall back behind the line if we were planning on having dinner not in jail. De Blasio has proven himself more relaxed about people exercising their constitutional right to organize than the Bloomberg administration but we all assumed it was just a matter of time before things got ugly.

While we debated it, a large group of men in light riot gear reinforced the entrance to Wall Street along with a number of mounted units that made a secondary line with their horses. Private security also showed up in their bad suits and helped orchestrate things while men in much more expensive clothing exited the imposing gray buildings behind the police line, their faces soured by the inconvenience. As the standoff continued, we moved up to Liberty Street where a second group had amassed and were bringing in NYPD trucks and busses. They closed off the street roughly the same time we got off of it. Confused looking tourists lingered as we made our way around the far side of the blockade which was far bigger than we initially realized. The boys in blue were coming in by the van full on Trinity while also closing off any escape routes toward Battery Park. They were literally running in groups of ten to twenty toward the protest. We hopped a train and ate sushi uptown while watching a small blurb about the protest on the news. Over one-hundred people were arrested while I finished my beer. It was a Tiger Gold Medal, imported from Singapore. I wanted something cheap but definitely not domestic. 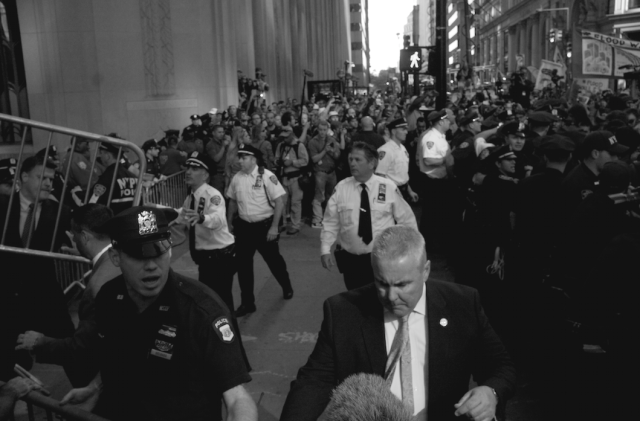 –Photographs are courtesy of Vincent Massimino.